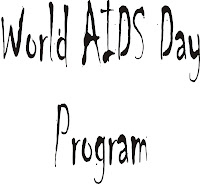 The World AIDS Day celebration was organised over a week from 1st December 2007 to 10th December 2007. Over the past years, Saheli Sangh has been organizing this day very auspiciously to generate a mass sensitization towards the HIV/AIDS epidemic and the women in sex work. This year the program had very fruitful impact especially to the women in sex work. During this week, Saheli Sangh had been able to mobilize approximately 350 women to share their doubts and feelings to the members of recognized institutions and clarify the myths associated to legal issues and health care practices.
During this mentioned days, Saheli HIV/AIDS Karyakarta Sangh organized various activities which were directly beneficial to the women in sex work. The programs conducted were mainly:
1. PLHA (People living with HIV/AIDS) Meeting
2. Saheli Sammelan (Annual General Body Meeting of Saheli Sangh)
1. PLHA Meeting – Sahel 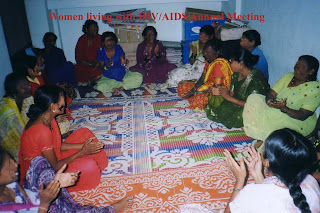 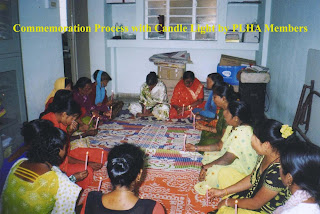 City. Today the Sangh has approximately 100 members as support group.
This meeting was not like the usual monthly meeting of women living with HIV/AIDS. This was a different meet, where women living with HIV/AIDS came together to commemoration the other women who had departed us due to HIV infection. An experience was shared by all members living HIV/AIDS. They mentioned about taking medicines on time and its immediate impact on health status. During this Annual Meeting, the PLHA group had a dance program to ventilate their feeling. All members at the Annual Meet participated. 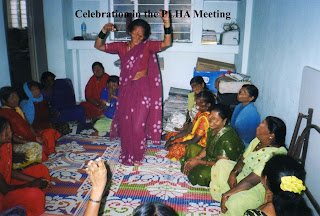 The Annual Meeting of the women living with HIV/AIDS was organized on the 1st December 2007, for being the World AIDS Day. There were 35 members attending the meeting. During this meeting nutrient diet was discussed for better health care. The follow-up of the nutrition program was to be conducted by the Community Kitchen operated by Saheli Sangh. Each member of the Support Group was to receive a nutrient diet every morning from the kitchen.
The group was also gifted with essential cleanliness materials for better health care and practice. 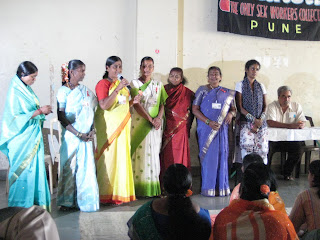 nization meet, share their experiences. The Sammelan is an annual program also known as Annual General Body Meeting. In the meeting, 300 women as members of the collective had gathered to celebrate the organization day of Saheli Sangh. It was organized on 8th December 2007. There was various entertainment activities conducted on this day such as quiz competition, musical chair etc. The members of the Sangh were also served food/lunch on the Sammelan day. The newly elected board introduced themselves to the member of the Sangh. Their roles and responsibilities were shared by themselves.
The program initiated with the introduction of the newly elected Board Members by the previous Board. Their roles and responsibilities were shared to the members of the Sangh.
Dr. Ganga Khedkar of Gadhikhana - NARI, mentioned about the evolving tre 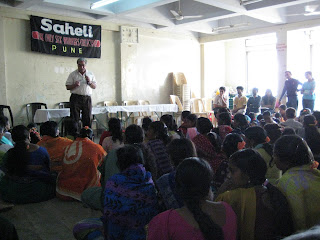 nds in HIV/AIDS, and the importance of how Saheli has been contributing to fight against the epidemic. The Director of Saheli Sangh (Ms. Tejaswi Sevekari) introduced the women in sex work about the working of the Sangh and similiary the Project Manager (Mr. Aditya Bastola) mentioned about the previous project Saheli had implemented especially the UNDP – TAHA project. Dr. Sachin Wankhede from B.J. Medical gave the know-how to the women about self protection from HIV/AIDS and keeping oneself in better health. The volunteers from Rotary Club, Pune conducted a session for entertainment purpose to the members present in the Sammelan.
In the quiz competition, the q 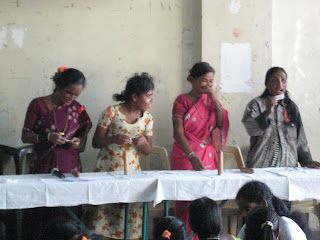 uestions asked were mainly related to HIV/AIDS and usage of condom. There was a competition of demonstrating the application of condom on a model. It is interesting to note that during this part of the competition, there were many volunteer from the sex workers community who wanted to demonstrate and simultaneously narrate the procedure of proper application and its disposal.An interesting note, over the years of conducting such Saheli Sammelan, various civil society members, law implementers and government officers were invited. Unfortunately very few showed their interest to support the marginalized group of our society. In fact, it was a very astonishing moment for Saheli Sangh, when the Station headmaster (Ms. Bidwe – PSI) attended the Sammelan and supported the women with full protection against their client abuse.
The idea of inviting such person to the Sammelan were due to the fact, of women in sex work have myth of visiting the doctor especially at the govt. hospitals and the denial to inform the police about abuses that takes place at the brothel level as a result to demystify the myths associated with such institutions was vital. Similarly it was also essential to organize a meeting where both participants who could share their feelings and especially motivate the women in sex work to report about ill health issues and the abuses which occur at the brothels.
The Saheli Sammelan was totally managed and organized by the Board Members. It is interesting to note, today, Saheli Board Members do not require a host to conduct such assembly. They themselves are capable to mobilize the women for such meetings. 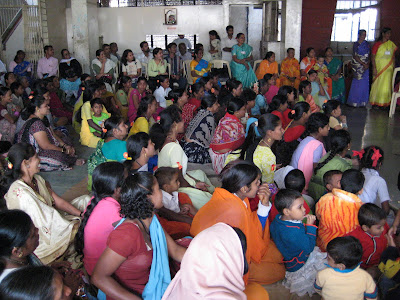 The Sammelan ended up with a lunch for all members and the guest who had participated.

Anonymous said…
And three cheers for your blog mate. It's good to know that you are doing something that will surely make an impact on our society. Keep it up and I know your work won't go unnoticed. Chandan Lama Ktm.
21 August 2008 at 04:42

Hiromi said…
Very helpful blog. Hepatitis c prevention is very important as there is no specific cure discovered yet. To know more visit the website.
24 March 2021 at 04:04 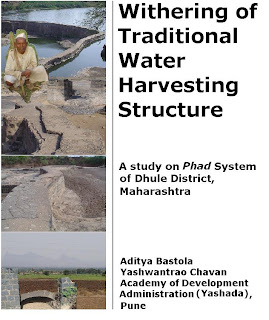